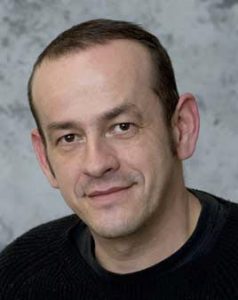 Our group has developed in the past few years novel hybrids based on 2D-vDW semiconductors where atomically thin 2D materials like MoS2, MoSe2 and graphene are combined with polymers, quantum dots and even biological motifs to obtain new or improved functionality for applications like light harvesting, solar photovoltaics and nanophotonics. I will present examples of how interface engineering in such heterostructures can be utilized to promote desired functionality or improved optoelectronic behavior.

Mircea Cotlet is a Materials Scientist and Principal Investigator in the Center for Functional Nanomaterials at Brookhaven National Laboratory where he manages the Advanced Optical Facility as part of the science user program. His group researches optoelectronic behavior of low dimensional semiconductors including quantum dots, 2D van Der Waals materials and interface phenomena in hybrids based on such materials